Capoeira is a unique Brazilian martial art developed by slaves who were brought to Brazil from West Africa by Portuguese colonists. Brazil was the largest contributor to slave migration with 40% of all slaves shipped during the Transatlantic Slave Trade in the mid-1500s. These slaves brought with them their cultural traditions and religions to the New World.

Capoeira is African in origin and Brazilian in evolution. The original movements were based on a courtship dance called “ The Zebra Dance,” where men would engage in mock fights. This ritual dance evolved into a form of self-defense, a way to resist their oppressors and transmit their culture through songs. Capoeira’s movements of attack and defense were blended with dance steps, acrobatics and musical instruments such as berimbau and the atabaque. Under the watchful eye of the oppressor, Capoeira appeared to be a harmless dance, but in reality the slaves were honing their fighting skills for the freedom they desired.

Capoeira is a form of resistance. It’s a response to slavery and a way people expressed their bravery and strength on the face of slavery and oppression. In indigenous language, word Capoeira means “tall grass”. Few slaves who escaped the plantation hid behind the tall bush and ambush their oppressor. These runaway slaves formed their own tribe known as Quilombo, the largest community being Palmares. Despite the efforts of Portuguese and Dutch armies to destroy the tribe, they remained free for 80 years and became the first African Kingdom outside the continent of Africa. In 1888 when Brazil finally abolished slavery, many African-Brazilians moved to urban setting in search of better a lives. Similar to what happened in the U.S after emancipation, the Portuguese government criminalized black lives and continue to exploit their talents.

In early 20th century, politicians and debt collector treated Capoeira as vandalism and called upon Capoeiristas to work for them. The practice was criminalized and prohibited; Capoeiristas found teaching, practicing, or using Capoeira were punished severely, for example, a slashed ankle, tendon, knee, or even throat. Capoeira, however, has always been a resilient phenomenon, and it practitioners continued to hand down their beloved way of life to the next generations. In response to the outlawing their practice, Capoeira moved underground and capoeiristas began adopting nicknames to identify each other without revealing their real identities, a tradition that continues to this day.

In 1937, Mestre Bimba opened the first Regional Capoeira in Brazil. This development was thanks to the president Getulio Vargas, who wished to recognize Capoeira as a Brazilian sport. Mestre Bimba’s teaching of Capoeira made a tremendous contribution to the Capoeira community. 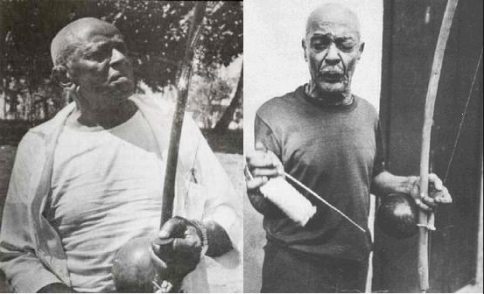 Capoeira is everything the mouth eats ~Mestre Pastinha

Music is an important aspect of Capoeira. It sets the tempo and style of game that is to be played within the circle, also known as Roda. Within the Roda, participants play musical instruments, where every participant sings the songs and claps their hands following the tempo. The fast tempo is associated with Regional and the slow tempo with Angole. There are three basic kinds of songs in Capoeira: Ladainhas, Quadras and Corridor. Ladainhas are solo songs about famous songs written by Mestre and is usually sung at the beginning of a roda. Quadras are narrative songs broken down into multiple verses. And Corridor is sung while a game is being played. The musical instruments are played in a row known as the Bateria. The first three instruments are Berimbaus, which includes Gunga, Medio, and Viola. Other instruments include Pandeiro, Atabaque, Agogo and a Reco-reco. 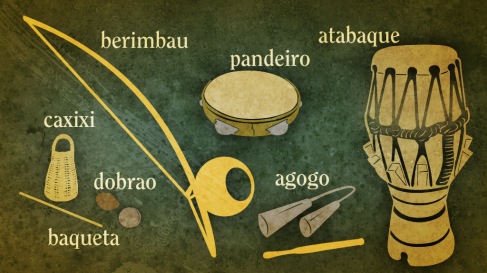 The fundamental movement in Capoeira is known as Ginga. It is accomplished by having both feet shoulders distance apart and then moving one foot backward and then back to the base while rest of the body follow the movement of the feet and the rhythm. The game of Capoeira focuses on demonstrating once skill without destroying or competing with the opponent. The purpose of the game is not to defeat the opponent with the moves but to enforce superiority without violence. Kicks and sweeps are the primary moves since handcuffed slaves developed Capoeira. It also uses acrobatic, athletic movements, and rolls as a defense mechanism. Most of all, the game is based on mutual respect. In tradition practice known as Chamada, one player has one hand in the air. The other player should approach and join the pose, they then walk back and forth until the first player separates and offers a slower attack and the game resumes.

I was introduced to Capoeira in 2013. What pulled into this practice was the philosophy behind it and people within the Capoeira community. The first day of class, Profe Mangangá from Seattle Capoeira Center talked about what it stands for “freedom of movement, wisdom over force, and strategy over speed.” Rather than focusing competing against someone, we are taught to demonstrate our skills, move with grace, strength and incorporate these philosophies not only in our practice but also in our daily lives.