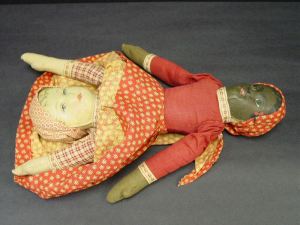 The cultural artifact that I have selected is the topsy-turvy doll (blacklegacyimages.com). The general consensus is that these dolls were primarily for African American enslaved children, but the purpose of the dolls is not clearly understood nor agreed upon. It is argued that they were designed so that Black slave children could play with forbidden White dolls, while being able to hide this fact from any White folk. One side of the doll is a White girl and when you flip the skirt it becomes a Black girl, thus hiding the White girl under the skirt from any dangerous eyes (Lavitt, 1982).

Author Kimberly Wallace-Sanders addresses the other side of the controversial question in her book, the one I personally believe is the more likely purpose of the dolls:

“African American slave women may have given dolls like these to their daughters as a preparation for a possibility of a life devoted to nurturing two babies: one black and one white. Topsy-turvy dolls are designed for children to play with one baby at a time, and this accurately reflects the division of care giving those African American women encountered, having to care for white children during the day and their own children at night. These handmade dolls are important, creative expressions of those otherwise silent women we know only as ‘mammy'” (Wallace, 2008).

The black doll was sometimes dressed in a headscarf and the white doll in an antebellum-style dress, supporting Wallace-Sanders’ theory that the idea was to socialize slave girls into their role as “mammies” or caretakers.

The brainwashing that went behind this children’s toy astounds me. From a very young age, girls were taught that it was normal to take care of somebody else’s children before their own, simply because they were Black. This doll and its uses are significant to me because of the heart that I have for young women and girls. When a young child is playing with a doll, she is mimicking being a mother, and in her young, impressionable years, that same child is being taught that there is something wrong with being black. There is a socially constructed, defined difference between a Black girl and a White girl shown in these dolls. If Black children are force-fed that White is better, or if that is all they are exposed to, then they will start to think “What is wrong with me?”

The creators of the dolls were likely slave mothers during America’s slavery era, but the purpose produced behind them was more likely designed by the White slave owners. As I said previously, it is argued that the inspiration for the mothers to make these dolls was so that their daughters could have a forbidden White doll to play with, or more likely, so that their daughters could practice mothering a White and Black baby separately.

However, after emancipation the cloth dolls were recreated by Albert Bruckner of Jersey City, New Jersey and New York City circa 1901. Bruckner dolls were sold at many familiar department stores such as F.A.O. Schwartz and Macy’s. The dolls of Albert Bruckner were distributed by Horsman. A topsy-turvy doll was advertised in 1905 and as late as 1923 (onlineadvisors.com). In my opinion, this is significant because this man exploited these slave children’s dolls for his personal gain, and in doing so ignored and made light of the dark history behind the dolls and their owners.

They were made by slave mothers during the American slave era. One of the many reasons this time period was significant for African Americans was because of the sexual exploitation aimed particularly toward the female slaves. One in ten Black households were headed by women whose children were the outcome of sexual exploitation by White men. These women were also given special things, like nice clothing, but it came with the price of being exploited by the slave master and being abused by his hateful wife. In addition, there were many childrearing constraints put on the slave mothers. Starting around the age of 17.2 years, slave women, on average, gave birth to 10.4 children. The “masters, not mothers, made fundamental decisions about the nature of childcare: when, where, by whom, how much or how little” (Family Diasporas and Parenthood Lost, 69). One fifth of slave women worked as wet nurses – breastfeeding the White woman’s children – and two thirds of slave women worked as caregivers for the White children. Since these mothers were given little time to nurse their own babies, slave babies were weaned far too early and were often given opiates and herbs to keep them from crying for food – both of which contributed to the high child mortality rate (Professor L. Pittman, Sexual Exploitation, 2015).

Post-emancipation, the topsy-turvy dolls were manufactured by Bruckner from 1901 to as late as 1930, and possibly even for a short time after that (onlineadvisors.com). This time period was significant to African Americans because circa 1900 America’s obsession with race had reached its apex. Race and racism practice was tightly intertwined with the labor systems, family life, and the relationship between manhood and citizenship. In 1900, approximately 90% of African Americans lived in rural, former slaveholding states. The infinitely smaller number of blacks that lived in the North, were more likely to live in urban neighborhoods. Where they lived determined what sorts of jobs were available. There were many barriers for Blacks to prosper economically at this time as well. For example, sharecropping (renting out a piece of farm land for a percent of the income) had exorbitant interest rates and fees. Violence towards Blacks was also starting to be at its peak. Lynching, murder, arson, lack of employment, and being arrested off the street to be forced into labor camps under vague charges were all common during this time (Professor L. Pittman, 1880-1990, 2015).

The topsy-turvy dolls was significant to the slavery time period because of what their purpose taught little slave girls. It was a way to teach slave daughters that they were going to grow up to separately take care of White babies and then their own babies – also that the White babies were always going to have to come before their own. It taught them from early adolescence that there was a distinct difference of importance between the two races. For example, mothers were forced to work instead of take care for their own babies and risked punishment when they stopped working to feed their babies. On top of this, mothers had to nurse the White babies before their own (Professor L. Pittman, Sexual Exploitation, 2015). Due to all these restraints, plus many more, slave mothers were unable to raise and give proper nourishment to their own children.

The dolls’ significance changes over time, most notably when Bruckner starts manufacturing the dolls under his name in 1901. He took light of the sexual exploitation that took place, and in addition, his production of the dolls showed that racism was still very much alive post-emancipation. Towards the end of their production in the 1930s, racism was as high as ever in the South and increasing in the North because of the great migration of Blacks from south to north (Professor L. Pittman, 1880-1990, 2015).

One thought on “Little Slaves and Their Dolls”