The sale began—young girls were there,
Defenseless in their wretchedness,
Whose stifled sobs of deep despair
Revealed their anguish and distress.
And mothers stood, with streaming eyes,
And saw their dearest children sold;
Unheeded rose their bitter cries,
While tyrants bartered them for gold.
And woman, with her love and truth—
For these in sable forms may dwell—
Gazed on the husband of her youth,
With anguish none may paint or tell.
And men, whose sole crime was their hue,
The impress of their Maker’s hand,
And frail and shrinking children too,
Were gathered in that mournful band.
Ye who have laid your loved to rest,
And wept above their lifeless clay,
Know not the anguish of that breast,
Whose loved are rudely torn away.
Ye may not know how desolate
Are bosoms rudely forced to part,
And how a dull and heavy weight
Will press the life-drops from the heart. 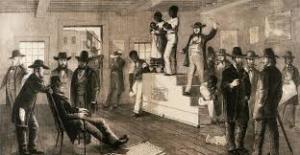 There is a certain aura of taboo that surrounds the history of slavery in the United States. We, as African Americans, are often told to forget the past, because the institution of slavery does not exist anymore. I feel there is also always a level of discomfort in a classroom environment when learning about slavery, as well as feelings of boredom or repetitive history for those that have no personal connection to the material. For example, it is learned that slavery was horrible, and that it affected African Americans for generations. We also learn how white masters were tough on their ‘property’, as slaves were subject to daily beatings and little to no food rations, as well as lack of pay. These lessons can easily go from one ear out of the other for some, and I believe that one cannot feel for these generations under bondage unless it is captured emotionally in a film, book, or in this case, a poem. Words can have a special effect on the way we as people perceive history, and “The Slave Auction” creates just that effect.

Written by Frances Ellen Watkins Harper, “The Slave Auction” is a six stanza rhymed poem which aims to capture the feel and emotion of one of the ways black people were sold in this country. I was first moved by the pure passion this poem revealed, its usage of diction and imagery captures an all too clear image of the horrors that auctions brought upon slaves. In one line, Harper writes, “As mothers stood, with streaming eyes/ And saw their dearest children sold/ Unheeded rose their bitter cries/ While tyrants bartered them for gold”. Immediately, images of black mothers, expressing sorrow over their loved ones flooded my mind, and the image of white owners trading money in exchange for human bodies also lingered within me. I thought of modern day black mothers, and the protection they seek to provide to their children today, only to realize black mothers during slavery could not protect all of their children or family members due to constraints on motherhood. Harper’s words strike readers in a way that creates emotion, which in turn makes one feel connected to the piece. The fact that I was able to read this poem and immediately have it capture my attention definitely drew me to it, and away from other cultural artifacts I considered using. Honestly, reading this piece almost drove me to tears.

Frances Harper, born in 1825, was the lone daughter of freed African Americans. A native of Baltimore, Harper had the opportunity to attend school until she hit her teenage years, and with the heavy influence of her uncle, a civil rights leader at the time, became interested in a wide range of literature (Yee). She then worked as a maid to a Quaker family, which provided Harper with a plethora of literature to read and learn from (Maryland Commission for Women). After publishing various novels and establishing a teaching career, Harper worked to drive the abolitionist movement. She joined anti-slavery groups and rallied for issues pertaining to the Black Community. Through her writing, Harper became a voice for the voiceless, and is often referred to as the ‘mother of African American journalism’ (Poetry Foundation). Her poem, ‘The Slave Auction’ is based off of her experiences working with slaves, and an attempt to amplify the cries of mothers, fathers, children, and ultimately, families, in their fight to freedom.

This poem was written in 1854 (Poetry Foundation), when slavery was well in its prime and a key factor in the development of this country’s economy. There were abolitionist movements in place, and rebellions igniting. For example, one of the movements in effect to protect black people and one in which Frances Harper was heavily involved in was the establishment of the underground railroad; an entire network of routes, passageways and safe places of refuge for slaves attempting to escape the slave system and head to the free North. The North at this time, though not completely free of racism and discriminatory practices, was seen as a safe haven for slaves who needed relief from metal chains. Even though this period was a dark time in African American history, the times through slavery, and subsequently, emancipation, created powerful art so as to illustrate parts of history through the lens of those who lived it, as embodied in “The Slave Auction”.

At the time Harper wrote this piece, slavery was still a very thriving institution. This poem stood then as an account of real life, current happenings in the lives of slaves in the south. Slave auctions back then were a very real, integral part of life that was able to flourish because slaves were seen as a commodity, and people seen as objects can be auctioned, traded, or sold at their owner’s will. I would say the significance of this poem does and has changed over time. In its birth, the piece reflected upon current events and was a political stance on the horrible truths of life as a slave, and its effects on the modern slave family. Reading the poem now has a slightly different meaning, as we have moved past the era of slavery and gotten to a different point in the making of where we (African Americans) are as a people. Now, this piece stands to remind us of our roots. It is a way to learn about the history of slavery, and treatment of black people in the 19th century in a way that ties together not only true facts of living as a slave, but also weaving in words and phrases in order to create feeling, and an emotional pull to our history as a whole in order to form connections to our past.

In the course of this class, we have covered slavery from its conception to emancipation, and the effects of the institution on later policy. This piece written by Harper only explains a part of the realities of slave life. These realities are that as a slave, one is not a person, but an item. Once a being is dehumanized in the way slaves were, it was easy for traders, masters, and the overall white population to view black people as less than human. It was also the racialization of slaves that was key in this breakdown, suggesting that as black people, slaves were inferior in their capacities to have human emotion compared to their white counterparts. This idea in itself made it so traders were content with breaking up families, and selling or auctioning them individually.

African American families at the time of slavery were not valued in any way. Dunaway provides evidence to this idea behind the slave family and how torn it really was, despite the slaves’ efforts to try and build communities within themselves. Slave families were disrupted at their masters will, and Dunaway captures this in an encounter with Maggie Pinkard, a former slave, “When slaves got a feeling there was going to be an auction, they would pray…” (Dunaway). Auctions were only one of the many ways slave families were destroyed. “The Slave Auction” therefore highlights an important part of slavery in terms of an auctions role as a business but also how it affected the dynamic of the slave family. This poem, ultimately, pulls together passionate emotion and hard fact to create an account of history that stirs feeling and informs us of our past as black people.

2 thoughts on “The Auction Block”