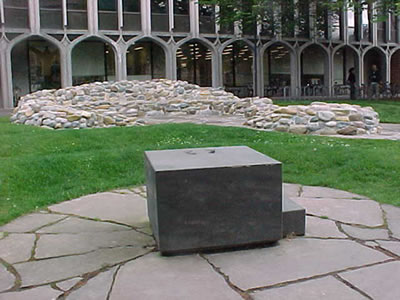 Blocked Out. 2005. University of Washington, Seattle.

A platform from which an auctioneer sells; the old courthouse where slaves were sold from the auction block is the definition that Dictionary.com gives. The block is located right in between Mary Gates Hall and Suzzallo Library at the University of Washington; the name of the monument is “Blocked Out”. It is a symbol of the auction block back when Africans were being enslaved, bought, and forced to leave their motherland, family, culture and identity. A new land where Africans would have the most difficult way of life adopting a new identity. Not only is there an auction block at this site but there is also an ear shaped-stoned wall that you can only see from an aerial view right next to the Block. The block representing the hardships of being sold and the Stoned Ear resembling a physical place to sit and listen to the ripples of the effects of the history of oppression in this country.

Being a student at the University of Washington for 5 years and walking passed this monument thousands of times and I never took the time to actually see it and learn about it. Until one day where my internship supervisor, who was a former American Ethnic Studies major at the UW now graduated, proudfully told me that he and a few of his buddy’s helped make this important piece of art come to be. His joy and proudness sparked an interest in me. Listening to him speak about the hardships that they experience the reasons why they decided to build it was just so interesting. I never have met someone and I have never had a personal relationship with someone who has made a tangible impact at one of the prestigious universities in the state, country, and the world!

The lack of knowledge that i had about this monument is probably the same with many students who walk by and/or even sit in this monument, not knowing that there is a piece of art that is important to our university. Just like I walked passed this object many others as well would, missing a piece of identity of our great school. This is the reason why i picked this artifact, so that people can know and appreciate it whenever they walk by.

The idea of having a monument representing those who went through hardships in our country started with Jaebadiah Gardner, a University of Washington Sophomore, who was trying to understand why there was a statue of James J. Hilll in the image of a plantation owner. James J. Hill was Canadian born and American grown man who was known to be the empire builder who transformed the Northwest. He was a Chief executive officer of the Great Northern Railway and helped and made it possible to put an end to slavery on the plantations but also underpaid immigrants for their hard work. Later, that same industry helped those who were in sharecropping to find a new way of life and a better economic opportunity. Another who was upset with the artwork displayed all over the UW campus was a female student named Sumona Das Gupta who called the the statues on the west facade of Suzzallo Library “White gods”. She was upset to see that only white persons were shown and not many people of color or even females. She wanted more representation on campus because UW is filled with many different types of cultures and ethnicities. But what really sparked the fire was when the University of Washington decided to put a statue of coach Jim Owens in front of the Husky stadium to celebrate his accomplishments with the football team he lead to many victories. These students did not like the fact they the school was putting a statue of Owens because of the mistreatment he had shown to African American players. This statue was revealed to the world in october 2003 during a Husky football game to recognize him and celebrate his success.

Jaebadiah and Sumona began to plan in 2005 and connect with heads of the University to be funded and to be helped. Fortunately, after several calls the student obtained help from vice president for development and alumni relations, Connie Kravas who helped fund them. John Young also helped them with executing the idea into something tangible. Professor John Young even had a course specifically for this idea to bring this art to the public. It took 10 weeks for the project to come to reality. Hard work and dedication was given to make this dream come true. Although the auction block’s reflect early African Americans and what they went through the “Blocked Out” monument is also intended for all those who contributed to this nation through hard work, so that they too can have a moment to be listened to.

As we all know many Africans first step into the new lands they were taken to were on auction blocks to be sold as property leading to having their humanity stripped from their very hands. Slaves helped this nation grow into the nation it is now. Every time i encounter an auction block it reminds me of those who suffered abuse and exploitation because of selfish reasons. It reminds me of the Movie Twelve Years Slave where women, men, and children were forced to leave the ones they loved.

What I loved about this is that the objective of the artifact was not to take a stand against the Statue of Jim Owens, no… Blocked Out was free from its roots and not enslaved to bitterness and revenge.