Almost every week there is always a new video that I see on my Facebook News Feed that shows racial violence and injustice. Most of them that don’t make it on the actual news are about white policemen’s violence against innocent black people and even children. Some stories actually make it on the news such as Trayvon Martin and Michael Brown’s cases. These stories all relate to each other, as they are the results of racial violence and injustice. I decided to choose this book/film that I have learned from my previous class titled “A Lesson Before Dying” by Ernest Gaines. This book illustrates the situation in the South during Jim Crow era in which racial injustice and violence were quite common. 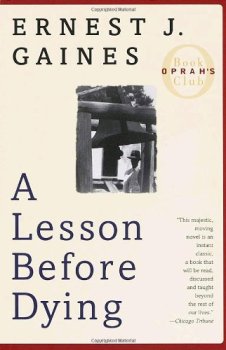 The book/film “A Lesson Before Dying” is about a man, who is a teacher, forced to teach a young man who was wrongfully sentenced to death about dying with dignity. The young man, named Jefferson, was accused of robbery and murder of a white man. Jefferson was only in the wrong place at the wrong time, and being a kid, made a wrong decision because of the situation he was in. One day, on his way to a store, he was picked up by his two friends who were also going to the same store. When they arrived at the store, both of his friends were trying to get a bottle of alcohol and have it put on a credit. The white owner refused and they all got into an argument that resulted to them shooting each other. All three of them died with Jefferson witnessing everything. Jefferson who didn’t know what to do and very afraid, decided to runaway, however, he took the cash from the register and a bottle of alcohol before he left. Just before he left the door, he was seen by a white man who accused him of murder. From there, Jefferson’s case went on a trial with all white jury, where he was sentenced to death. In addition to that, he was compared to a “hog” who didn’t know what he was doing and incapable of doing such murders. However, as a result of the Jim Crow laws, he was charged with murder.

Reading about this book made me think of how the story is actually still happening to this day. After many years, Jim Crow laws can still be seen today. Racial injustice is still occurring among African American communities. This is very significant for me because as a minority I know that it is possible that this can happen to me while living in this kind of society. No matter how innocent I am, if I am against white people, I will always lose. While reading the book, the author made it feel like you are actually there. Ernest Gaines made you put yourself in Jefferson’s position in which you are accused of something you did not do, but because of racial injustice, you have no power to go against their decision. This kind of feeling where you have no power is actually experienced by many people to this day. For example, in Trayvon Martin’s case, no matter how much his family and community protest against the ruling of his shooter, they don’t really have an impact on the decision because of racial injustice.

The author of this book is Ernest Gaines. Ernest Gaines was born in Louisiana where his family used to be slaves for some plantations. His writings are mainly about the stories he had learned from growing up in Louisiana as “story-telling and oral tradition were a powerful part of African American life in the rural South” (Achievement.org.). On writing A Lesson Before Dying, Gaines was influenced by French filmmakers in which he saw a film about a “social worker who visits prisons” and being constantly annoyed by one of the prisoners (Levasseur 1999). He used this idea to write A Lesson Before Dying in which Grant (the teacher) visits Jefferson in prison to educate him. Gaines further explained that “you learn from all these things” where even though Grant was the teacher, he learned a lot from Jefferson just by visiting him in prison (Levasseur 1999).

This cultural product is very significant during the time period it reflects because it represents the cruelty, unjustness and the oppression that African Americans were facing then. Grant, the teacher, who was forced to educate Jefferson on how to die with dignity, was also in some kind of prison. Grant’s character can be compared to any African Americans because of how even though he is a free man, he is still in some kind of prison that is called “oppression”. During the Jim Crow era, African Americans were treated unjustly. Racial segregation was very common and going against this was impossible. Everyone was treated and must learn to act based on their skin color. In the book, racial inequality is clearly depicted. For example, African Americans were not allowed to enter a white man’s house through the front but only through the kitchen. Grant also wasn’t allowed to look directly into a white man’s eyes, or even to interrupt a white man’s conversation. Another example is the education during this time period. African Americans’ schools were very much different from whites’ schools as they have more materials and equipment for learning. This book is very significant as it exemplifies the racial segregation and inequalities that African Americans faced during the Jim Crow era.

Over time, this story is becoming more and more important because of how everything feels the same like nothing has changed. “In many ways, little has changed – many young black men are still unfairly condemned and in a harsh penal system with no hope, their community still economically and socially locked out – John Doyle” (Center Theater). Similar to the videos I have been seeing on my Facebook newsfeed, African Americans are treated very differently compared to white. Today, when there is a white man who committed some kind of mass murder, he/she would be considered mentally unstable. However, if it was a black man who committed the crime, everyone in the African American community will be blamed for it and even be discriminated because of this.

The book A Lesson Before Dying relates to what I have learned from class about the Jim Crow era and how it parallels to what is currently happening today. Just like the setting in the story of the book where Jefferson is in a prison and Grant in some kind of prison called “oppression”, can be compared with “slavery as a total institution” just like the American prison system (Pittman 2015). This similarity between these three time periods prove that racial injustice and inequality will always occur because of racism and white superiority. Jefferson can be compared to many African Americans who are treated unjustly just because of their skin color. Trayvon Martin, for example, innocent young man shot dead because of “looking suspicious”. Many African Americans are treated like this, however, they are not given the same importance as whites. The society would never listen to African Americans just like how Jefferson was sentenced to death for something he did not do.